By sam September 13, 2008
Through out the past 3-4 weeks I , like any other person in India , we were bombarded with news  " that The World will be Destroy by this December - Its the Last date of Humans to Live " --  the News of destruction, the News that the human race will going to die and that we will not live any longer extra extra. 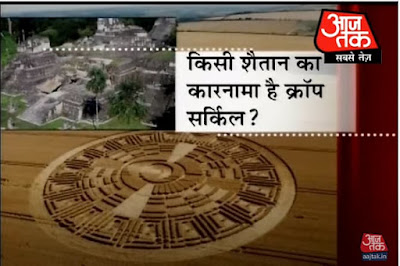 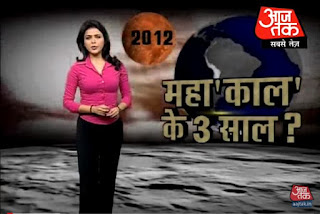 Its the havoc TV News channels like the India TV, Aaj Tak , Sahara and Star News who were in the Run for there respective fame for a news which is much crispy and tasty for the TRP ratings.
These Channels make a big issue out of nothing like that issue and started discussing on the Panel of expert( Some time I doubt the very credibility of the expert as Some one is a scientist in some research and some from the Astrology gurukul, who never give a specific answer, never guide on the issue but just go on talks with a questions, pause for the commercial breaks, and than continue with the next phase till the time exceeds for the next episode.
The marketing strategies are dangerously crafted and they never think for a while for the Public , to whom they have already misguided.
First the Ultimate end of the World on 21st December 2012 according to the Maya Calendar. The Fact that no one single organized country or renowned Community follows the Mayan Calendar , than why this type of stories on the News Channels with a misguiding attitude and a sense of making public havoc?
Secondly the testing of CERN particle Physics Experiments News even get modified towards this type of Fakenews too.
The Large Hadron Collider(LHC) in a mission to get an insight into some of the unanswered facts of the universe, the very existence of us. But the Media  News are creating havoc out of it for there commercials.
Current Mood : Cool
Current Song : Pehela Pehela Pyar Hai (HAHK)
Food Taken : Samosa, Vada
FakeNews
Location: India

The Himalayas, are most tempting places for me. I do dream the snow clad mountains and its rivers , pulsating the rhythms of natural ice cold water. Today I reached Base camp at Kasol, which is at an height of 6500 ft above the sea level. The Training starts from the next day , I reach base camp. Ready for the Rippling and Rock Climbing training sessions. Trained to zoom down from the hieight , with the help of a rope( The only way you need at some toughest mountain terrains, specially when going to bandhak thatch from Biskeri camp) My Cellphone , got wet when its get into the cold waters of Parwati river.. Dry process on the roacks beins A rest for half an hour in the Kasol Forest Senic vioew from the base camp, the Mighty Himalayas. That we are going to Pray for the next 12 days of our Sarpass trekking.
Read more

Through out my Years in Professional Works I am bombarded with Words - related to Economy , that i hardly understand in-depth.  Words like GDP, Inflation, Currency Fluctuation, Purchasing Power , Interest Repo Rates, Devaluation etc. It seems very Difficult for me to understand the Economy and its Jargons like the ones i mentioned above. Fortunately YouTube makes it easy and the Creators like ColdFusion Tv and  Ray Dalio are Worth Appreciating  I have Listed these Interesting Informative Videos , that makes me understand the crucks : Video 1 :  How The Economic Machine Works by Ray Dalio Video 2: How is Money Created? – Everything You Need to Know
Read more

Academy Award for Best Animated Short Film for Father and Daughter A Story of Love untouched by anything , even the seasons of GOD , is a remarkable depiction by Director Michael Dudok de Wit. Its a Classic Example of Story telling through Visuals & art work. Amazing , Awesome and Incredible Story. . watch the Short Film here One Comment Describe the Whole Story : So Dad leaves and daughter returns year after year without his return.She is an old woman and finally walks out to where she finds Dad's boat where it had sunk so many years ago. It wasn't that her dad didn't return because he didn't care.It w as because he had perished. She lies down inside the boat ruins and herself dies. In spirit she is a young girl and now sees her Father who is in spirit and they re unite. Death is the great equalizer.   see the Short film here in youtube
Read more