By sam October 02, 2009
My trip to Tadepalligudem , Andra Pradesh starts on the 1st day of October. I have a RAC Ticket in the Bhubaneswar Chennai Express at 11.45 am. I took the Public transport most of the time to avoid excess expanses and Pollution. As it was a whole day travel and a 11 hour journey from Bhubaneswar to reach Tadepalligudem, It never tensed me for the RAC reservation seat. So I had to Share the Whole berth (Side Lower) with One chap, Somyakanta Mohanty (Kutu), who is in the final years of his Mechanical Engineering at Binayak Eng College , Chennai. Even I took two delicious homemade chappati from Kutu with Potato Fry in Day Food. 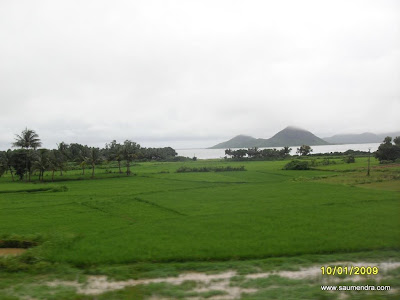 With just 1 hour of traveling , We started to converse slowly and suddenly the conversation goes long till I get down at Tadepalligudem. In the 11 hour of our Journey, I with one of the CSF Jawan did helped one of the poor family to be out of the clutches of a so called Squad Ticket Checking Officer, which seems to be more than Fake than real.

On the way I took some of the best snaps of Mother Nature in the Chilika Lake region, With Fog Clouds touching the Green Mountains, With the miles long green Paddy fields, lashing out cold breeze, and the darkness of Monsoons with in-between slow Showers. The View from the Train Window is hard for anyone to overlook its beauty. Some of the Snaps I had taken were pasted below.


At 12.40 am I reached Tadepalligudem Station, where Gopal has come to receive me. My arrangements for the night was done at the Maruti Residency, which changed to Gopals Home , the next day after the Home Worship and Puja arrangements were completed.

I had my Dinner at Gopals place. I took Andra style dinner were they serve Idly, sambar