By sam May 06, 2010
The second camp was at the height of 9500 ft, named as Faul pani. unlike open space of
Gauna pani camp the camp site here at faul pani is within the deep forest cover and the tents were erected on the stepwise mountain soil, covered with decomposed forest leaves. 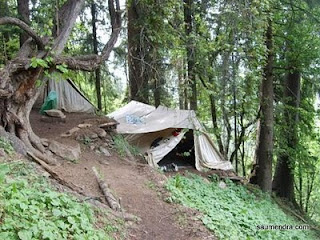 This camp site is little bit un standard one, as it does not provide open space for roam , to get a hot cup of tea , you have to climb a little and than descend to the tent. Most of the time we were into our tents , under the sleeping bags , singing old kishore kumar songs....